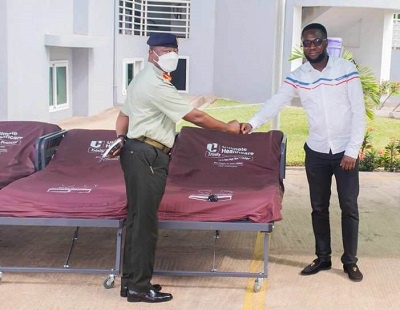 Priority Prime Limited, an electrical engineering company based in Accra has donated 20 beds and mattresses to the Ghana Armed Forces (GAF) yesterday at Burma Camp in Accra.

The items valued at GH₵50,000 formed part of the corporate social responsibility of the company.

Presenting the items, the Chief Executive Officer (CEO) of Priority Prime Limited, Danise Owusu Yeboah, said the donation was aimed at supporting the army in the performance of its role to the state.

“We have seen the Ghana Army do a lot of work for the country, they go through a lot and we decided to seek support from some charity organizations outside the country to which there was a positive response,” he said.

He said his outfit will continue to solicit for support for the GAF to help it perform its role dutifully.

Receiving the items, the Chief Staff Officer (SFO)  at the GAF headquarters, Brigadier  General Charles  Agyeman-Prempeh, said the donation was timely as the army has expanded its manpower base to effectively and efficiently undertake its mandate of providing security for the country and its citizenry.

He said the donation would help address a critical need adding that the items will be deployed to the Medical Reception Stations (MRS) of the new units in the Upper East and Western regions of Ghana.

Brig. Gen Agyeman Prempeh said the GAF medical facilities were concentrated in the south and the  Army High Command has realized the need to improve on existing facilities as well as provide new ones for troops and their families in the various units in the northern part of the country.

He thanked  Priority Prime  Limited  for the  kind  gesture saying that  “this donation  will help improve  the  relationship  between the  military and the  civilian.”

Sign up and you will be the first to know the latest news, insider-only info, and more.